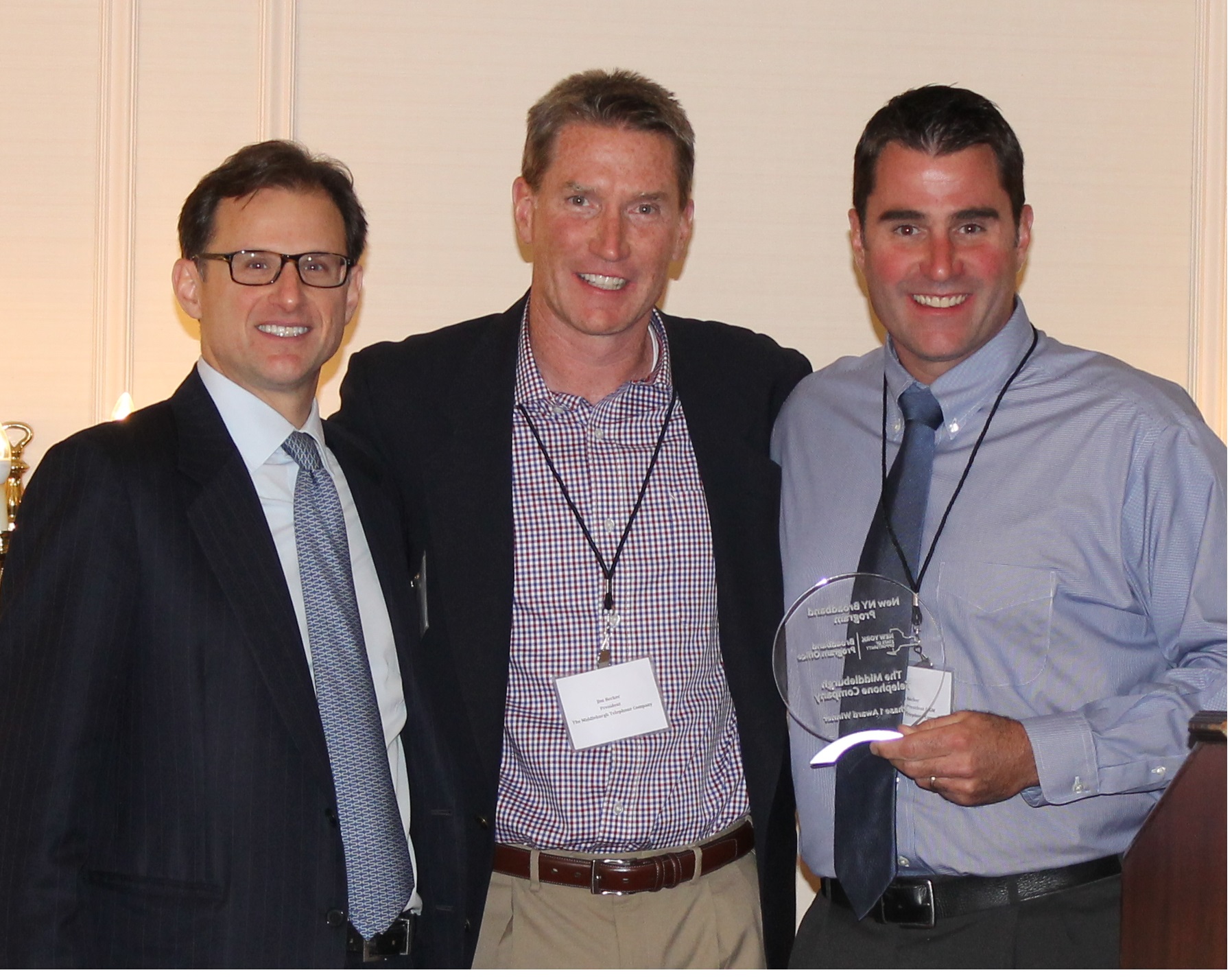 On August 3rd 2016, in a live press announcement by Governor Cuomo and NYS Public Service Commission Chairwoman Zibelman, MIDTEL was awarded a $5.5M grant under the New NY Broadband Grant Program. The $6.9M overall project, which includes MIDTEL’s $1.4M private investment, will bring fiber optic based broadband services with up to 1Gbps in speed to 1650 homes and businesses in the towns of Blenheim, Broome, Conesville, Fulton, Gilboa, and Rensselaerville.

The state’s $500M New NY Broadband Grant Program was put in place last year to help bring broadband services capable of at least 100Mbps to unserved and underserved homes and businesses in the state. Grant awardees are required to have the network completed and operational by year-end 2018, with customer installations happening during the ongoing construction and up to 24 months afterwards.

MIDTEL’s grant was the 2nd largest award in Round 1 of the least-cost auction process. Round 1 awards yielded a total of 25 grants to 14 different service providers, totaling $54.2M in grant money and $21.6M in company matching funds, for an overall investment amount of $75.8M in upgrades. The grant awards ranged from $59,000 to $5.8M, and will help bring broadband services capable of 100Mbps (minimum of 25Mbps in the very rural areas) to over 30,000 homes and businesses that otherwise would have no service or minimal Internet speeds.

MIDTEL President Jim Becker, who was publicly thanked at the announcement by PSC Chairwoman Zibelman for his assistance and efforts in helping bring the broadband grant program to reality, said, “We are ecstatic to receive this grant to help further deploy fiber broadband services to the rural areas we serve. The people living and working in these areas deserve the same level of service as those living in urban and suburban areas of the state!” Becker went on to say, “This is an exciting opportunity for our company and the people in this region, and we are very appreciative of the efforts from the NYS Broadband Program Office, our state legislators, and Governor Cuomo’s office to make this happen.”

MIDTEL Executive VP & GM Jason Becker added, “The economics of bringing fiber based broadband services to rural areas is extremely tough, due to the long return on investment time (fewer homes and businesses available to recoup the huge investment cost), and without this type of assistance from the state the rural areas would further lag behind. The Governor and legislators clearly understand the reality and have stepped up in a huge way to transform the upstate rural economy.”

Senator James L. Seward said, “Expanding broadband services to rural areas is integral to business, education, emergency response, and general quality of life. While connecting rural communities can be a meticulous, time-consuming, and expensive undertaking, it is imperative that we make this investment in our future. I have consistently advocated in favor of additional state funds to help advance connectivity and applaud the governor for also recognizing this crucial need. I also offer my congratulations to the Becker family and MIDTEL on winning this grant award – it speaks to the sterling quality of the company and their proposal.”

MIDTEL expects to finalize permits and necessary grant agreements by the end of this year and plans to begin construction of the network in early 2017, with services starting to be available in late 2017 or early 2018. In the near future, company personnel will be reaching out to the homes and businesses in their Round 1 award areas to provide an update and more information.

As MIDTEL begins working on its Round 1 project, they will also be reviewing eligible Round 2 locations. As part of the announcement on August 5th, the Governor and the NYS Broadband Program Office also officially announced the opening of Round 2, which encompasses another 300,000+ eligible homes and businesses. Applications for Round 2 need to be completed and submitted by November 30th, with award announcements expected in early 2017. MIDTEL is currently reviewing the eligible census blocks to determine what areas it may apply for in Round 2.

The Program is designed to ensure that New York’s most remote communities receive the high-speed broadband Internet they need and deserve. The Program supports the deployment of advanced technologies to achieve the Governor’s goal of providing New Yorkers with access to internet download speeds of at least 100 Mbps in most places, and 25 Mbps in the most remote parts of the state, by the end of 2018.

Award recipients were selected through a “reverse-auction” methodology, which prioritizes bidders seeking the lowest amount of state investment per new household served. In order to avoid cost duplication, the Time Warner Cable-Charter merger footprint was excluded from Round I. This exclusion enabled the New York State Broadband Program Office to operate with a highly targeted scope and design an innovative auction process across the state, while preserving state funds.