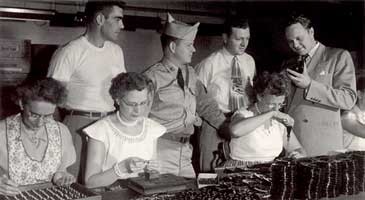 Randall F. Becker and Marjorie Sillman Rose had always known each other growing up but never dated.  After high school graduation, Randy had been away attending Syracuse University and serving in the Army – Air Force Division for four years during World War II.  After his discharge in 1944, they began dating.  Randy and Marge were married in 1946.

In 1948, two years out of military service with the US Army Air Corps, E. Scott Rose’s son-in-law, Randall F. Becker, joined the company and worked both in the central offices and the outside plant. He learned the business from the “bottom up” literally, as was the experience with many family-run telephone companies, doing whatever was necessary to maintain telephone service to the community.

In 1952, The Middleburgh Telephone Company broke ground for its new headquarters at Cliff Street and Wells Avenue, where the company still stands today.

“I remember when I first came to work with the company, I didn’t have any telecommunications experience, and dial service was just in its infancy,” says Mr. Becker. “The Franklinton office was our first dial installation, and I spent many nights up there keeping the equipment running, especially in cold weather. You see, there was an interrupter in the system, and when a customer lifted the handset to make a call or went ‘off hook,’ they would hear the dial tone. If the interrupter was so cold that it would not work, we had to manually start it by hand to keep it running so customers could complete their calls. I spent quite a bit of time up there just keeping that office running!”

Middleburgh customers were then introduced to the revolutionary, modern dial tone instead of the constant intermediary of a local operator working with a magneto switchboard. The conversion from magneto to dial service was, indeed, a revolutionary change for telephone customers back in the 1950s. It was a major technological step forward for the company, but also instantly established some additional calling “freedom” for telephone users.

Randy explained what the changes meant to Middleburgh Telephone customers:   “In Middleburgh we had two magneto switchboards, located over the Valley Theater, to handle the calling needs of our customers. Each board had 160 lines, so we had a capacity of 320 available lines at that time.  We had party lines with as many as 20 to 23 customers on a line. One customer might have one short ring and five long rings, for example, while another might have three long rings and one short ring. There were various combinations, and this was all controlled by the operator who had a ringing key in the magneto switchboard so that she could send out the ringing signals on the lines. By the same token, with a magneto telephone, when a customer rang it, there was a magnet in the telephone that would send out current that would lower the little drop in the switchboard so the operator would know a call was coming in on that line. She would plug in the answering cord, ask what number the customer wished, and then, using the ringing key, would plug it through the drop, calling the customer by sending out the rings. That’s how telephone conversation was maintained in those days. Since the conversion to dial switching, the customer just picks up the phone, hears a dial tone and places the call.”

After conversion to dial, party lines of 20 or more customers were reduced to 10-party lines, and, eventually, to four parties on a line. Gradually, over the ensuing years, individual service was offered to all Middleburgh Telephone customers.

In 1954, Between the end of the war and 1959, Middleburgh Tel was able to continue to change with the times and adopt the latest advances in telephone technology. The company embarked on an improvement program to convert the old magneto service to dial operations. Franklinton area customers became one of the first areas in New York State to have dial service.

MIDTEL history will continue next month!